Last spring we decided that we needed some ducks on the place, so i bought 4 cute little ducklings. There is really only one thing more cute than a baby chick, and that is a duckling. So when I came home one day with four cute little baby ducks, as you can imagine the girls were beyond thrilled. Especially Eden, our two year old. You see the ducks were kept in a box where they would stay warm while they were little, and thus they were easy prey for a two year old. Suffice it to say the ducks very well could have been loved to death at the hands of a toddler, but that was fortunately not in the cards. Well, as it turned out, one of the ducks was big and white, so we named him “Moby Duck”. 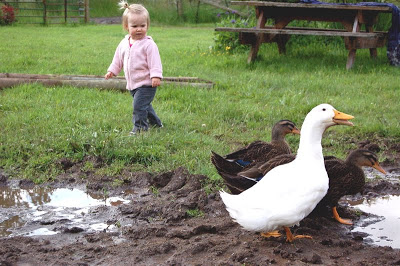 Moby was a gentle giant, but he was slow. By default he was the one that Lia could most easily catch. He was always a good sport about it though. He never hissed, or bit, or hit either of the girls. Despite occasional bouts of captivity at the hands of a sweet little girl, Moby lived a happy, peaceful life. He was free to roam the whole farm with his three duck friends. It could have been a fairy tale ending, but alas it was not meant to be. One day I came home to find Moby floating face down in the creek. After a bit of investigative work, we arrived at the conclusion that it was my father-in-law’s dog, Meg who whacked Moby. After Moby, the raccoons did away with the two girl ducks. We are down to one drake, and the poor thing has nobody but the chickens to hang out with.