Last night at approximately 9:30 p.m there was a disturbance out at the chicken coop. 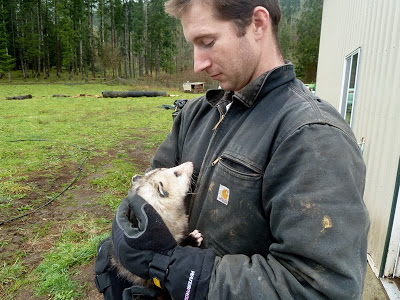 It turns out this little chap is the one that has been giving the chickens such a hard time lately. Incidentally it was his craving for peanut butter that was his undoing. Only too late did he realize that it was a trap! The night before last I cut one of the legs off of Lia’s (our 4 year old) tights, and stuffed it full of peanut butter, and then hung it in the live-trap. Sure enough, just like grandma Hansen said it would… it worked like a charm. 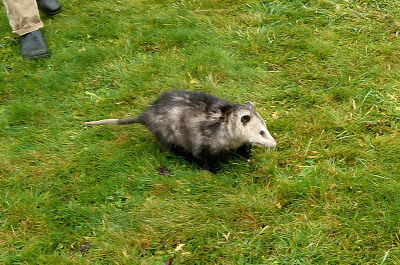 This morning the girls were thrilled to see a “real-live” possum in action. Well ok, there really wasn’t that much action. He didn’t even play possum. He just kind of sat there. But it was awesome. The story did have a happy ending. The possum was safely returned to the wild. Maybe he will be back to visit someday, but I doubt it. There are plenty of busy roads between him and me right now. The odds are definitely not in his favor. However, with a little bit of luck and some “street smarts”, he could very well make the journey. I would then have to name him “Sancho the homing possum.”