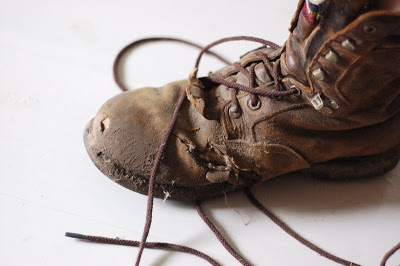 Jill gave these boots to me for Christmas when we were newlyweds six years ago. It was a really huge sacrifice. At the time we were both in college and starving financially. I was working outdoors in construction, and it was winter time. I had a pair of really cheap work boots that were not waterproof, and aside from being very uncomfortable they really just thrashed my feet. Sometimes I would come in from work and the soles of my feet would be covered in blisters. It wasn’t because the boots weren’t broken in, I had been wearing them for months. They were just poorly made. The new boots made all the difference in the world. It really touched me to be the recipient of her selfless sacrifice.

The old timers have a saying…”use it up, wear it out, make do, or do without”. The time has finally come to retire my beloved boots. Jill and I have talked about it a little bit, and it is somewhat sad for both of us, but I guess they’re just boots aren’t they? It is kind of funny how an inanimate object can resurrect old bits and pieces of your life. Dust off the memory bank, so to speak.
So long boots.
R.I.P.