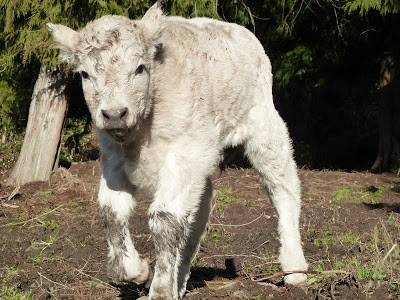 Today is my little brother’s birthday. This one is for you, David! You get to pick a name for this little guy. We haven’t weighed this calf yet, but he was born quite a bit bigger than the other calves. His silvery white coloring comes from the Charolais (pronounced… shar-lay) bull named “Buster” that we had about 20 years ago. Buster was big! He was almost six feet at the shoulder, and well over 2,500 lbs. Notwithstanding his exceedingly large stature he was an extremely gentle, and amiable specimen.
The hangout… 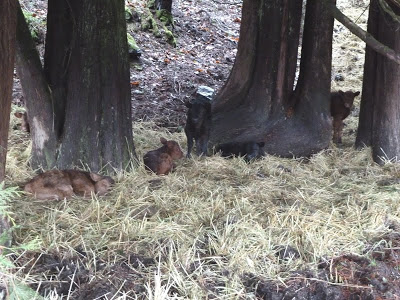 This is Whiskey Hollow. It is where the calves like to be. Rumor has it that my grandfather did a little bit of moonshining in this spot during the great depression. Now, it is just nursery for little bovines. The cedar trees offer nice cover from the elements, and they really dig the bedding that we put down. Sometimes they burrow in and all you can see is an ear or two sticking up out of the straw.